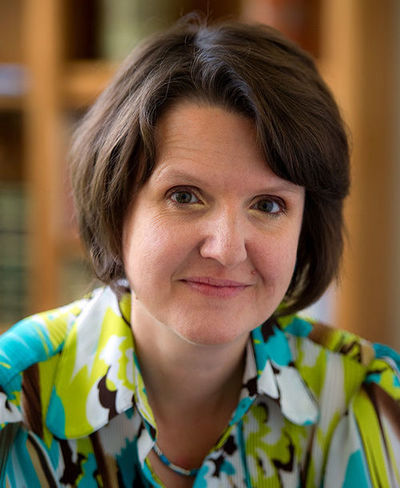 In late antiquity, thinkers began to develop a new idea of the self.

“We get a new notion of the ‘subject,’ and that notion is often expressed, for example, in the language of reflexivity — withdrawing to yourself, talking to yourself, taking care of yourself,” said Gretchen Reydams-Schils, a professor in the Program of Liberal Studies. “There’s a very strong increase in that kind of language.”

In September, Reydams-Schils began a 10-month fellowship at the Israel Institute for Advanced Studies of Hebrew University in Jerusalem, as part of a multidisciplinary research project that studies expressions of the self among philosophers, lawmakers, representatives of religious traditions, and biographers in ancient Greece and Rome.

Reydams-Schils, who has concurrent appointments in the Departments of Philosophy, Theology, and Classics and directs the Notre Dame Workshop on Ancient Philosophy, also received a fellowship from the European Institutes for Advanced Study, an umbrella organization which funds residencies in 19 cities across Europe. EURIAS is co-funded by the European Commission’s Marie Sklodowska-Curie Action.

“It’s a wonderful recognition, because this grant is open internationally to people across the world in all kinds of disciplines,” Reydams-Schils said of the EURIAS fellowship. “I was happy to see that fundamental research in the humanities could get this award.”

The project in which Reydams-Schils is participating, “The Subject of Antiquity: Contours and Expressions of the Self in Ancient Mediterranean Cultures,” brings together scholars of philosophy, law, literature, early Christianity, Jewish Hellenism, and Judaism to understand classical thinkers’ concept of the self and how that conception manifested itself in Jewish, Christian, and Roman culture.

Reydams-Schils, who specializes in the Stoic and Platonist philosophical traditions, has already studied the idea of the self. In her most recent book, The Roman Stoics: Self, Responsibility, and Affection, she argued that Stoics — who emphasized self-control — advocated a mediation between high philosophical ideals and traditional, worldly values.

“The self is not established for its own sake,” she said. “It’s established to allow for a better, more meaningful participation in society, and to see oneself as belonging to a universe that is ordered by divine reason.”

“The self is not established for its own sake. It’s established to allow for a better, more meaningful participation in society, and to see oneself as belonging to a universe that is ordered by divine reason.”

At the Israel Institute, Reydams-Schils is examining how the self is related to the idea of “becoming like God.” In trying to prescribe how to become like God, ancient thinkers used both Stoic and Platonist ideas: trying to see see God as involved in the universe, as transcendent and detached from the universe — a Platonist concept — or as both.

“What self remains in this ideal of becoming like God?” Reydam-Schils said. “It becomes important how you see this God, whether you see God primarily as transcendent or as a kind of providence, caring for the universe.”

For example, Philo of Alexandria, a Jewish Greek author, “leans to the Platonist side,” Reydams-Schils said, but he also wrote about the Book of Genesis from a more Stoic perspective.

“That’s when Stoic ideas come in, because now we’re talking about the God who cares for the universe in Hebrew Scripture, a god of widows and orphans,” she said. “So to become like God in that context means also to take care of those around you, to take care of the community in which you find yourself. Philo of Alexandria is a great author for seeing those tensions come together.”

As part of the multidisciplinary team at the Israel Institute, Reydam-Schils is able to meet with scholars in other fields and hear and present work in progress.

“If you realize the broader complexities, it fine-tunes your own understanding,” she said. “You learn to understand what is truly distinctive about the material that you are dealing with.”

The work, she said, can provide new insight — and perhaps inspiration — into how human beings relate to the world around them.

“The indirect connection with contemporary concerns — which I think is very valuable — is how we as human beings can think of our very selves not in isolation, but in relation to other human beings, and in relation to the world that surrounds us,” Reydams-Schils said. “We can go from there to Pope Francis’s Laudato Si’ — we have to find ways of thinking of ourselves as part of this broader framework, or else we’re going to pull one another under.”