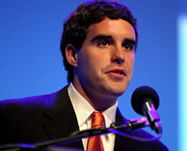 Just before Christmas 2008 Patrick returned from a year and a half of service with the Holy Cross in Uganda. He was an English teacher in the Holy Cross secondary school and organizer in the Parish. He also had the chance to do a two month internship in Parliament on the Peacebuilding and Conflict Resolution Committee, where he worked on national legislation designed to address issues of justice following a peace treaty between rebels and the government. Unfortunately the peace process collapsed at the last minute and so his legislation was never enacted, though it may be important later when the war does end. He also was contracted by an NGO to do a month long research project on small arms proliferation and cattle rustling in Eastern Uganda among nomadic people called the Karamojong.

Patrick used his work in Parliament and the research he did for his thesis to publish a small article in the East African Journal of Social Justice.

Back in Ohio after a summer working at Jones Day Law Firm in Cleveland, he will begin a two-year masters program in public policy at Harvard's Kennedy School of Government. The department selected him as a co-winner of the 2009 Stephen Rogers Award for an outstanding student who is planning on pursuing graduate or professional studies.