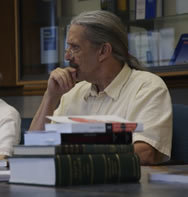 You have to make a decision on your course of studies for the next three years. You have gathered all the information you could get and considered your choices from every angle, but there seems to be almost too much info. Giving good counsel is not easy, but sometimes I can at least offer an insightful moment from one of my own perplexities, a moment that perhaps contains an image that is more decisive than all the calculations and argument.

In September of 1958 and again in 1959, Otto Bird, then leader of the General Program, the forerunner of PLS, gave an opening charge to all the students of the Program by reading from The Sword in the Stone, the first novel of The Once and Future King by T.H. White. This first book is about the education of Wart (King Arthur), accomplished through Merlin's magical transformations of Wart into a

communistic ant and a boundary-less goose, for examples, that culminates in

Merlin's insisting that Wart hear the doctoral thesis of the stodgy Badger.

The Badger relates that, at one time, all the embryos of the preternatural animals had been called before God to be asked what specializations they would like to have, what parts of their bodies they would exchange for tools. And so, spades for the forearms of the mole, spears for the teeth of the saber-toothed tiger, and so on. But one embryo hesitates before the Almighty; when questioned, he responds that he trusts to the Lord's judgment that he is as he should be in the divine wisdom.

Calling all the other decided embryos, the Creator tells them to

behold Man, who had figured it out, and who will be an eternally potential creature. Just as one could consider the choice of each embryo as instances of specialization reiterated in the curricula of the University, so one could consider human technologies and social strategies as extensions of man's anatomy, his mental and physical faculties.

But where is the choice of Man that addresses his essential, yet to be activated potential?

Perhaps in the Program of Liberal Studies.

We Called It PLS